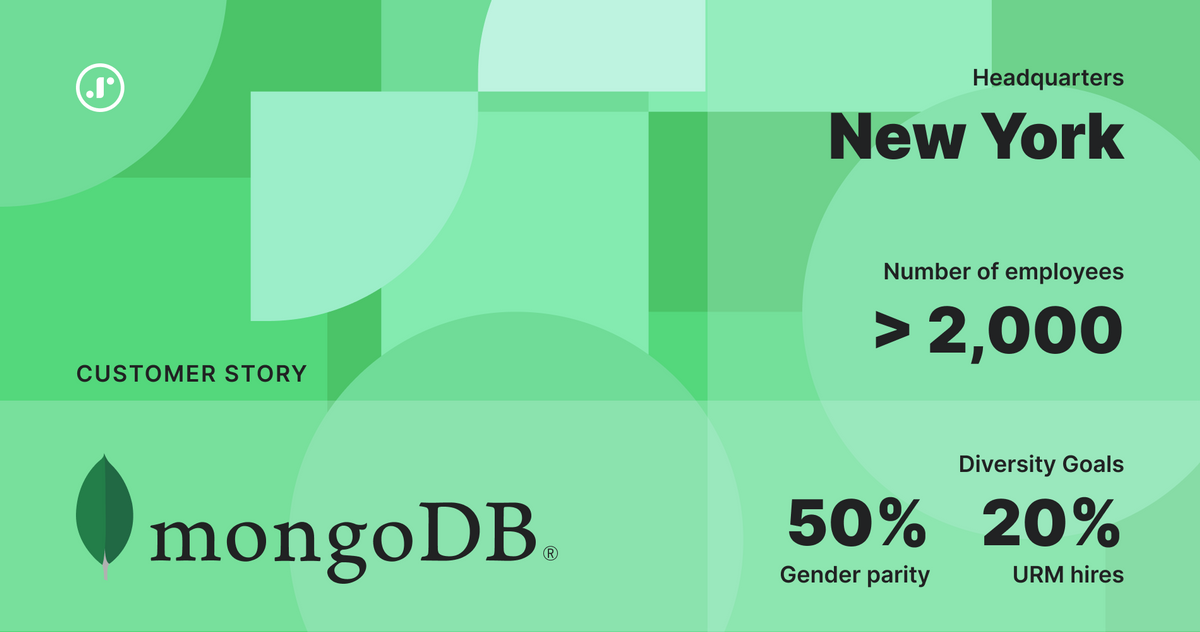 Headquartered in New York City, MongoDB is on a mission to make data stunningly easy to work with. It does this with its database platform that provides the back-end infrastructure used by many popular apps, including the online game Fortnite.

As an org, MongoDB is spread across five time zones with 41 locations in countries like the US, UK, Germany, Spain, etc. And with COVID-19 as a tail-wind, MongoDB has done well in 2020. As a result, the organization decided to be even more aggressive with its recruiting efforts in the latter half of this year. Specifically, MongoDB is aiming to grow its URM program by 20% YoY, as they’ve done consistently in the past few years.

MongoDB’s hyper-growth was what brought Emily Cardner and her team to Canvas in 2018 as one of Canvas's earliest partners. Emily Cardner, Manager, Campus Recruiting, manages MongoDB’s entire campus program, which includes hiring all interns and new grads in the US every year. With the high volume of inbound applicants the campus programs receive, Emily knew that her team needed a tool that enables them to sort through their inbounds more efficiently. That way, the team could stop spending hours and hours every day reading through resumes. And instead, spend more time being pragmatic and thoughtful about all the different diversity and hiring initiatives that are important to MongoDB.

MongoDB does really well in terms of the number of candidates that apply to job openings directly. In 2019, the recruiting team at MongoDB received over 20,000 applications for just 85 roles. The sheer volume of inbound applicants that Emily’s team has had to manually go through every day is overwhelming and time-consuming. As a hyper-growth company with over 2,000 employees (and growing!), Emily and her team needed a better way to identify top talent from their applicants faster.

Sifting through the noise to find top talent faster

Canvas's role in supporting the talent team at MongoDB starts with helping them manage their inbounds more efficiently. Applicant tracking systems (ATS) only allow recruiters to manage their inbound applicants by chronological order, which is a terrible waste of time. This inefficiency is especially draining when there are thousands of inbound applicants coming in regularly.

Instead of using their ATS system directly, Emily's team integrated their Greenhouse system with Canvas to get bi-directional syncs. This integration allowed them to streamline their recruiting workflow and take bulk actions directly on Canvas's platform. On top of that, the team imports all their inbound applicants into Canvas to quickly identify top talent by filtering off over 75 self-reported candidate data points such as years of experience, demographic data, gender, ethnicity, and more.

“Canvas has changed the way we recruit because we’re now able to source on inbounds based on different skill sets, universities, ethnicity, gender, interests, year in school, location preference—all different things that we can filter on now. This allows us to be much more strategic with our time.”

Another one of Canvas's biggest advantages for MongoDB is that the two sides of our platform - candidates and recruiters - have the same purpose. “It’s a great community where the candidates and company both have the same goal. You’re looking for a job, and I’m looking to hire. And we’re both in the marketplace for the same mission. And through that, Canvas has created a tool that makes it easy for recruiters like me. For candidates, Canvas has made it easy for them to find events, engage with recruiters one-on-one, and have these talent communities.”

Shifting to virtual events to expand their reach

In-person events have been a big part of MongoDB’s traditional recruiting strategy. And each year, the talent team visits a handful of schools to attract potential interns and early-in-career candidates. This year, since the COVID-19 pandemic has put a temporary hold on most in-person events in the US, Emily's team participated in a few online university events to see what schools are still putting out there. To date, the university-led virtual events have not gone well and Emily’s team only reached a tenth of the people they did in the past at in-person events. So, the team at MongoDB decided to take advantage of this period and shifted their recruiting strategy to run virtual events on Canvas.

“We’re allowed to be a more creative and innovative with virtual events. And we also need Canvas to supplement the fact that we’re at a disadvantage with some of our traditional methods that we rely on.”

Since the change to online events, Emily's team has reached more candidates by inviting talent from schools they couldn’t normally afford to go to or weren’t sure about. “We thought, why not? Why don’t we just try it since there’s no harm in engaging with students from new schools or dollars spent to run virtual events.” In the past month, MongoDB ramped up their virtual events strategy with two main events: a virtual open house and an online Women in Computer Science Summit. The team plans to scale their virtual events effort even more in September and October 2020 to strategically engage with talent of all backgrounds.

Perhaps more important than the ability to manage events directly on Canvas is the built-in audience of 300,000+ diverse talent that MongoDB’s team can now reach in a single marketing push. “It was great to use Canvas as a place for talent to register, host that information, and do email follow-ups.”

Hitting their hiring goals with confidence

As a company, MongoDB is super data-driven, and teams track and measure their success in many ways. For the talent team, they’re constantly working to increase:

In 2019, Emily’s team hit their hiring OKRs with ease when MongoDB hired all of its URM early-in-career talent through Canvas. By Summer 2021, MongoDB aims to be at 50% gender parity and 20% underrepresented racial minorities in their hires. To meet these expectations, MongoDB has embraced Canvas to confidently get them there. “While partnering with student groups, HBCUs, and HSIs are important, having a tool like Canvas to help with diversity hiring has been instrumental.”

MongoDB relies on Canvas to source and filter through applicants to identify top talent from different backgrounds early in the recruiting process. And having the data and information in one open, accessible place like Canvas gives the MongoDB’s team an advantage with speed. “If we had to look through applicants chronologically in our ATS, we wouldn’t be able to see who the talent is that would be good for us until it’s too late. Canvas allowed us to be quicker, more pragmatic, and thoughtful about all the different diversity initiatives and hiring initiatives that we have.”

“It was a true partnership with Canvas from the beginning. Their support team is amazing. And I’m extremely thankful to the team for listening and for creating such a cool platform.”

Are you ready to hit your diversity and inclusion goals? Schedule a demo with one of our experts or contact our team at [email protected].

Hundreds of company partners are using Canvas's all-in-one virtual recruiting platform to connect, source, and engage with talent of all backgrounds to build a diverse and inclusive workplace. 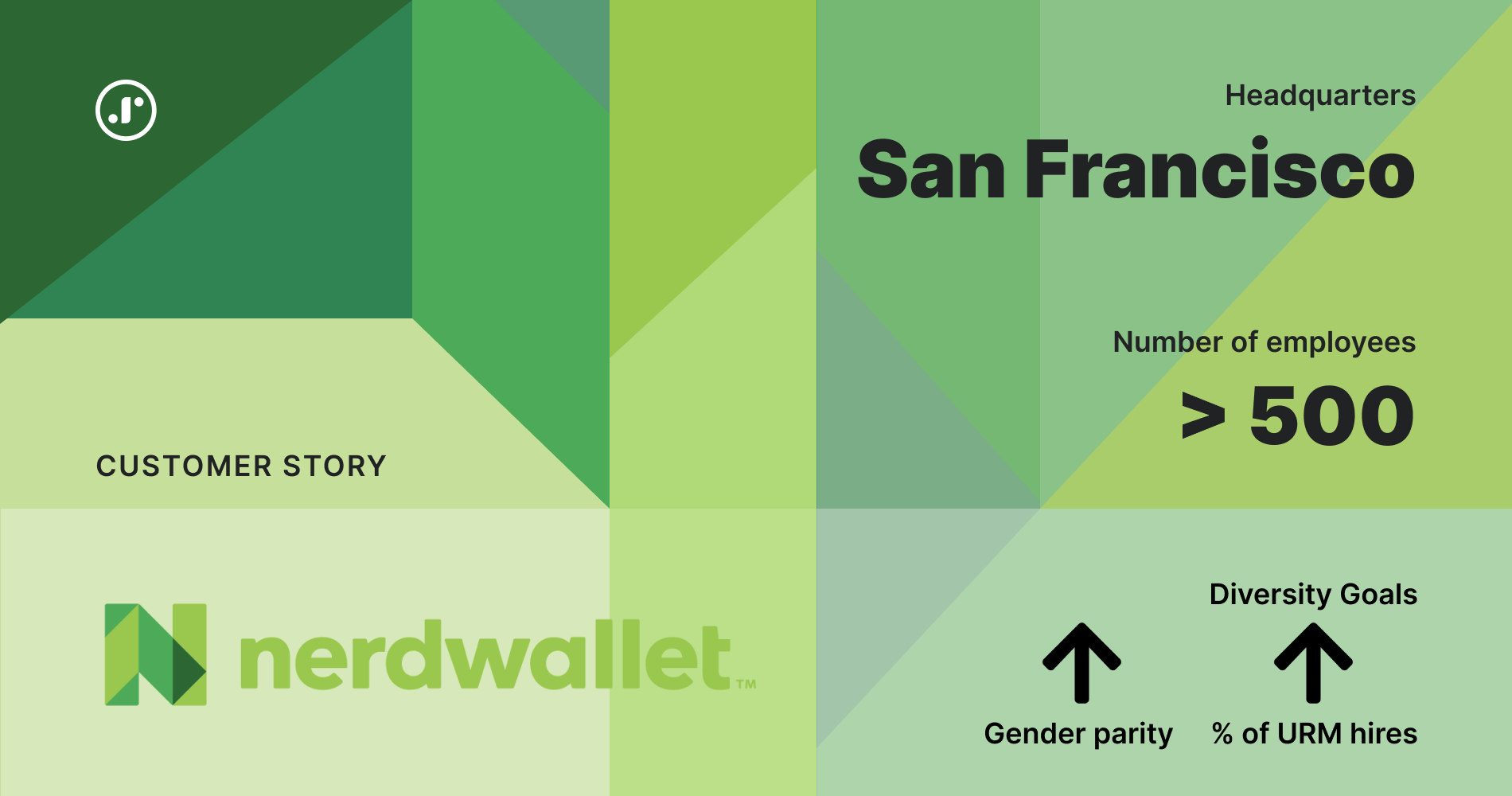 How NerdWallet Modernized Their Recruiting Process With Canvas